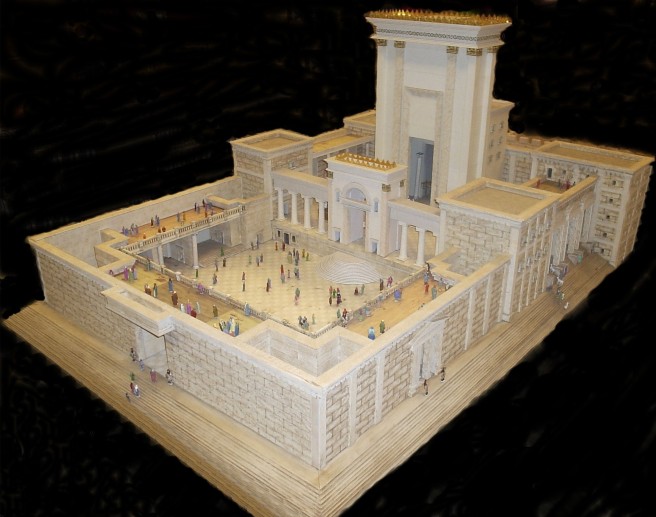 The 9th of Av is a Jewish fast that happened earlier this month; Jews fast on this day because the Temple was destroyed twice on this same date on the Hebrew calendar.

I do not fast on this date, as do many Jews.  There is only one day on which we are commanded to fast, and that is Yom HaKippurim.  That is a day of affliction of the soul, which the scriptures clearly define as a physical fast, and which ancient Jewish history bears out.  Fasting on other days is not wrong, but is just not compulsory.  Men have elevated some fasts up to the level of a mitzvah, but Elohim has not done that.  Our Rabbi, Yeshua, clearly contends with the P’rushim, the forerunners of today’s Rabbis, when they chided His Talmidim for not fasting on those days.  Yeshua told them basically it was none of their business, because HE was their Rabbi, and HE will tell them when to fast.  But, many Jewish people today who SAY they follow Messiah do not actually follow Him, but THOSE LOST Rabbis!

Sorrow over the loss of the Temple is appropriate, to some degree, perhaps. But, the book of Ivrim [Hebrews] was written just before the destruction of the Temple in 70AD, and Sha’ul was basically telling our Jewish people in Yisra’el who trusted in Messiah NOT to mourn the coming loss of the Temple, because we have a New Kehunah [Priesthood] with a BETTER Kohen Gadol [High Priest], Yeshua Himself, and that we can ACTUALLY ENTER THE Beit HaMikdash in HEAVEN, after which the earthly temple was fashioned.  We have no need of an earthly temple!  We actually can go before the throne of His Compassion in heaven, while Yeshua now stands at the right hand of Elohim for us.  We have NO NEED to offer sacrifices on earth, the blood of bulls and goats, because we have a final and perpetual sacrifice, the blood of Yeshua, and His resurrected Body in which He bore our punishment for sins before He died!  So, no, I do not fast on Tisha B’av!

I do not, however, ignore the coming third Temple, because it is prophetic!  And the whole “Palestinian” conflict is NOT about Jews taking ‘their’ land, as there is actually NO SUCH THING as a Palestinian!  That group are all ARABS, and they are “posing” as Palestinians, and the name fits, because it means INVADERS.  The conflict is actually over the Muslim world not wanting a Jewish Temple.  But, the Temple will come; and in it will stand the Sheker HaMashi’akh [Lying/False Messiah], in whom all the world will put their trust as their Messiah, instead of Yeshua, the Messiah and Son of G-d, including our lost Jewish Rabbis, and many Jewish and ‘christian’ people.

Losing site of the fact that we NOW have a Temple and a High Priest is dangerous for followers of Messiah.  It robs us of the reality of our prayers and forgiveness, and of the effectiveness of our ministry, when we mourn instead of rejoice in our LIVING KING and High Priest, Messiah Yeshua.  Too many Messianic people are conforming to the image of the earthly Rabbis, and NOT to that of the Son of Elohim, our ONLY Rabbi, Yeshua HaNatzri, who did NOT follow the P’rushim in their commandments.  This does NOT make me an anti-Semite, as too many have accused.  Yeshua did follow the customs of Moshe, as do we, but the LOST Rabbis since Messiah have changed those, added to them, and elevated THEIR customs above the Mitzvot.  They’ve actually stated blatantly that they have authority over His Torah, and tell G-d how to interpret it.  How can our fellow Messianic Jews ignore the fact that these Rabbis are LOST!

Pray with me that we unify around our Rabbi, Yeshua, and that we not lose site of what is coming on this world.  The third Temple will be built AND defiled by the false Messiah, whom Israel will follow for a season.  So will many Messianic people, and Christians, and that is sad, and scary.  Not following Yeshua in HIS WAYS is to follow the deceiver.  Wake up, and trim the light of your lamp.  “Your Torah is a lamp.”

One thought on “Tissue be of…”