Messianic nut-job strikes again! If you don’t like Hebrew, don’t read this!
I LOVE the symbol of the Menorah, and what it represents.
The meme attached does not show that before he said, ‘in your ascending,’ He said “Say to Aharon,”
This is the High Priest of Yisra’el.
I read this while working on my own copy of Torah [we are commanded to write it!, it is a VERY spiritual process, I highly recommend it.] But I ‘saw’ something in it this time that blew my mind.
It starts out in the second person, talking to Aharon, and it switches to the third person… ‘he shall light the seven lamps.’
Hmmmmm
First, I notice this is an ASCENT. The Menorah sits just before the vail, on the north side of it, where one can see all seven lamps horizontally before him. The ‘Ner Tamid,’ or ‘eternal lamp,’ the one in the middle on the ‘tree’ of the Menorah, is always lit, but the other six have to be lit at dusk. But, in this chapter, this is the FIRST TIME the Menorah has ever been lit, so ‘someone’ had to light all seven lamps…
We know from Hitgalut [Revelation] that the Menorah of the Temple was a picture of the Ruakh HaKodesh that burns in front of the throne of Elohim.
We also know from that book that each Congregation, if it is founded on Torah, has a Menorah in its midst. But, that Yeshua Himself will take it away, if we do not remain faithful to His Word. This has happened in most settings, though most people are oblivious to it, because they have such a distorted view of ‘church.’ They ‘think’ the Ruakh is ’emotion,’ ‘chill bumps,’ ‘agape’ fake love, crying, running, screaming, falling down, spewing incoherently, ‘dancing in the spirit’, all of these can be foisted on any people group, through music, lighting, and hypnotic techniques that many have used in certain religious settings in America since the 1840s.
The Ruakh is TRUTH! The TORAH IS TRUTH.
But, I digress.
So, ‘someone’ lights the lamp here, after Aharon ASCENDS up before the ‘face’ of it. The word that leaped out at me was MUL. It is actually the word for CIRCUMCISION!
The Menorah is in the ‘heart’ of the Temple! Right in front of the veil. ‘Circumcise your HEART!’ This is a TORAH command, Shaul [Paul] did NOT invent it in Romans!
“What does יהוה , your Elohim, require of you, but to fear יהוה your Elohim, to walk in all His ways, and to love Him, and to serve יהוה your Elohim with all your heart and with all your soul; to keep FOR YOUR OWN GOOD the commandments of יהוה , and His statutes, which I command you this day? ………….. Circumcise therefore the foreskin of your heart, and be no more stiffnecked.”
What makes one certain he has a Menorah in his heart, in his congregation?
Circumcision of the heart?
In ancient Judaism [Messianic Judaism!] it is called ‘Teshuvah!” And this is what Yeshua said would cause HIM to remove the Menorah from the congregation in Ephesus! They were believers! And HE was going to TAKE from them!
“Remember, therefore, from whence you have fallen, and SHUVU! [ REPENT! ] And DO the first WORKS! [The Torah was FIRST]. Or ELSE, I will come to you very soon, and I will REMOVE your Menorah from its place, unless you REPENT.”
If we read Acts, we see that Ephesus studied the TORAH daily for two years under Shaul’s tutelage. At this point they had TURNED from it, and Yeshua told them TURN BACK TO IT, and DO it!
This is circumcision of the heart. Shaul says it applies to JEWS and GENTILES.
Rom 2:29
“But a real Y’hudi [Jew] is one who is inwardly so, and circumcision is of the heart, spiritually, and not literally; whose praise is not of men, but from Elohim.”
The Menorah is the Ruakh, with seven ‘breaths’ that light a flame upon Messiah. Read Isaiah 11:1-2 and ‘see’ those seven breaths/flames. 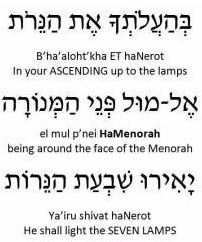 4 thoughts on “Ascending to the Menorah to meet Messiah!”