The following partial verse has been slightly ‘bent’ for certain purposes within certain theological circles:

Reading it as the Masoretes ‘punctuated’ it:

This can be read many ways straight from the scroll, as there are no punctuation marks in a scroll!

“A Wonderful One, A Counselor, A Mighty One, A Strong One, My Father [is] Eternal, Prince Of Shalom.”

El Gibor and Avi Ad are usually tweaked to support a certain doctrine. Understand, Yeshua, the Son of Elohim, is Ekhad with His Father, He said so. BUT, He is also MAN, tempted by HaSatan, suffering death, rising from the dead.

Elohim is the Hebrew word for G-d, the Creator.

If we look at ‘EL’, it does not default to mean “God”. In fact, this phrase, EL GIBOR, is never used anywhere else in scripture. Not one other place.

EL means “mighty one”, and can also mean ‘god’; But, it is not used of the Creator unless there is an accompanying name, usually, like “El Elyon”, which means “G-d Most High”. “Gibor” means strong one. EL’s two letters are alef and lamed. An alef is a letter made up of two other letters: the yod and the vav. The Vav is a ‘fastener’, and the yod is a ‘hand’. There are two yods in the alef, one above and one below. See the picture below. So, this word can symbolize the ‘mighty one’ who connects heaven and earth, the vav being extended between heaven and earth, with a hand toward heaven and one toward earth. And he is a shepherd! [The Lamed, the second letter, is a shepherd’s staff, and also the root word for ‘talmid’, from where we get our word ‘disciple’.] 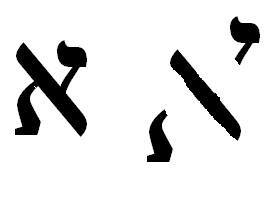 My point? Yeshua’s humanity is just as important as His divinity. Elohim, “G-d”, the Creator, cannot die, and cannot be tempted by HaSatan. Yeshua, the man, the Son of G-d, the ‘second ‘Adam’,’ was tempted by HaSatan, and died for the sins of the world. If He is not a man, then He did not die, and could not therefore have risen from the dead. If He did not rise from the dead, it is ridiculous to trust in Him. We all need to find a hobby.

Elohim, His Eternal Father, DID raise Him from the dead, setting Him free of the chains of death and She’ol, which none of us can pretend to understand. His Father did not come down out of heaven in a ‘man suit’, to be a paranoid schizophrenic, talking to himself, referring to himself in the third person. He SENT His Son; Yeshua left His Glory behind, His Glory is His Father. That’s why it was prophesied, “MY FATHER IS ETERNAL,” and NOT “eternal father”.

This phrase, פֶּלֶא יוֹעֵץ, אֵל גִּבּוֹר, אֲבִי-עַד, שַׂר-שָׁלוֹם DOES speak of the eternal nature of Messiah, do not get me wrong; but, it does NOT tell us that Yeshua IS His Father. There is a difference.

One thought on “Wonder WHO?”