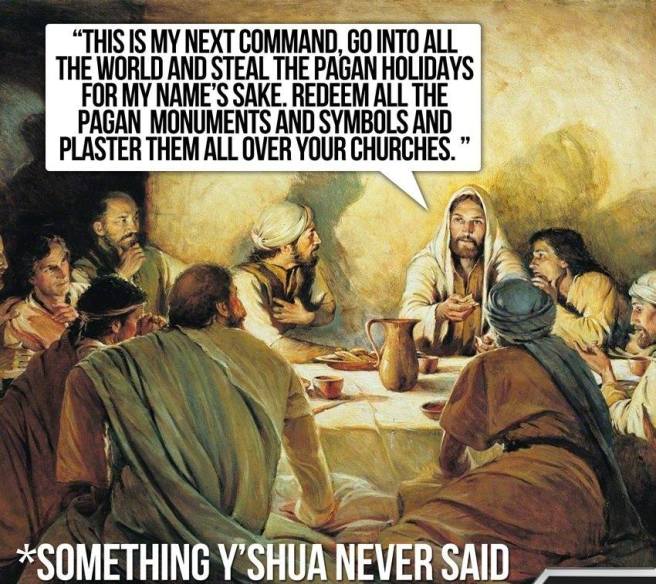 The official version of the doctrine discussed below is different than what most ‘evangelicals’ think; the issue is, they’ve never studied the origin of the doctrine, nor read the recorded version of it from the horse’s mouth.  We have.  And we find it wanting, very much.

The below was my last statement in an online conversation on the topic, wherein so-called ‘christians’ berated me and accused me of being a blasphemer and damned me to hell out of their own mouths, spewing the ignorant hatred that was steeping in their own hearts.  They gave evidence of the very sensation I describe below, of the ‘spirit’ of murder that birthed this doctrine.  If you are a Christian believer, a genuine person of FAITH who truly trusts in the blood of Messiah for Salvation, then at least stop and reason.  There is NOTHING in the Word that supports the ‘official’ version of this doctrine, and there is NO NEED for the made up words that were invented to create/support this doctrine.  Those words are NOT in scripture.  Not once.  “And through covetousness they will exploit you with feigned words, whose judgment from the very beginning has not ceased, and their damnation is always active.”  Kefa wrote those words concerning ‘bible teachers’ of his day. [2 Pet 2:3]

The post that preceded the below I’ve long forgotten, but it basically said that the Catholic Church and Luther and Calvin were justified in killing the people they killed, and that those who were berating me online were justified in doing so ‘In the Name of Jesus’.  When is it EVER justified to KILL in the Name of Messiah Yeshua?  Is THAT how Kefa, Yokhanan, Ya’akov, and Sha’ul founded the Congregation of Messiah?  That is the SAME spirit that created and drives Islam.  And cursing someone in His Name is the very blasphemy the Torah and Yeshua both address.  We will NEVER ‘unify’ as a beautiful bride, as long as we are defending manmade doctrines, especially if doing so with murder and blasphemy.  It SHOULD tell you who is a false believer, and who genuinely trusts in Messiah.

Your logic is egregiously flawed. First, the people that Constantine, the popes, and protestant reformers killed in the name of ‘Jesus” due to the Sunday “Sabbath” and the Trinity doctrines were believers in the Messiah, not pagans who sacrificed their children in fire, worshiped sexual deities under trees, drank blood offered up to demons, etc etc. The Canaanites were given 400 years, by God, to repent. THEY chose NOT TO. THEY defied Him, and HE punished them. Israel was His army, commanded by Yeshua [Joshua 5:13-15] HE is going to kill again, all those who reject Him during the great distress coming on the world. [Rev 19] Who are you to JUDGE GOD for using Israel to punish people who defied the miracles they saw! Rahab confessed for all of Canaan that they KNEW that יהוה was God! Yet they did not repent. This is NOT true of the ones murdered by the popes, by Luther, by Calvin, et al. These people were people who trusted in the Blood of Messiah to cleanse them of sin, and strove to live a life as free of sin as possible, and they were murdered, not by an army, but by RELIGIOUS authorities killing in the name of ‘christ’.

Second, none of you have presented ANY scripture that shows me that I am to reject the Torah and embrace three gods stuffed into one body, separate but equal. You cannot, because it is not in scripture. You have told me that it has to be ‘interpreted’ out of scripture. Baloney. “DO NOT add to nor take away from this book [Deut 4, Rev 22] All of you have ASSUMED what you THINK I believe, labeling me a Modalist, an Arian, and such, so you feel comfortable condemning me with those the popes condemned. I never said I was any of these. You do not understand what I believe, because you’re not actually reading my words and endeavoring to understand them; you just so badly want me to confess this unbiblical doctrine [catholic trinity] that you spout its tenets apart from scripture.

I believe as Yeshua taught: “Trust in Elohim, Trust ALSO in Me”; “I and my father are “Ekhad”: UNIFIED. “Just as My Father SENT me, I also SEND you”. “I proceeded forth and CAME OUT OF my Father”. “Father, make them EKHAD IN US, JUST AS I am in YOU, and YOU are IN me, make them ONE in us”. Suddenly this ‘godhead’ [a term which also is NOT in scripture, in any early language] gets HUGE if we say that “Jesus” IS “God” because He said I and my father are one; HE is the one who said, “MAKE THEM [those of us who follow Him] ONE IN US. The posts here simply echo the demands of the inquisition run roughshod over those who would not ‘confess’ what was demanded of them by ALL of so-called ‘christianity’ at times. ‘Confess that Jesus is God, or die”.

It has been implied here that there is some ‘special knowledge’ or ability one must have in order to be able to ‘understand the mystery of the trinity’, yet no one can show me where the Apostles PREACHED and DEMANDED a belief in three gods in one, in order for anyone to be saved. The gospel sermons in Acts 2, 3, 4, 10, 13, 14, had ZERO elements of this HIGH DEMAND you all place on believers. If it is so dad-gum important that I believe that there are THREE GODS [GOD the Father, GOD the Son, and GOD the Holy Spirit], why did not the Apostles make it plain when they preached salvation to both the Jews AND the Gentiles? There is ONE GOD, He sits on His throne, and He manifested His Word in a human body, who now sits at His right hand; He also manifests in His Ruakh [Breath] to us today, being inside of me, inside of my wife, inside of my son, and daughter, and inside of all those who confess His Son with trust. Does that make us God?

I DO NOT deny that Yeshua is the power behind the creation: I have said, echoing scripture, that HE was IN ELOHIM in the beginning, and CAME OUT OF Elohim to become flesh [John 8:42, 1:14]. The Torah IS the Word, as is all of scripture, and Yeshua embodies ALL THE SCRIPTURES.

All of you are parroting years of Greek DOCTRINE and not using ONE SCRIPTURE to convince me otherwise, but only your doctrinal demands and Socratic logic and human philosophy. Telling me to read the book of Galatians, as if I have never read it, just shows me you all assume things about me because you do not know me. “Our fathers inherited LIES.”

The book of Galatians was written to correct the Shammai error that was forced into the Messianic community by people who did not trust in Messiah! [Gal 2:4] You label me, or imply that I am a Judaizer, simply because I keep the commands. You do not understand what I am, OR, you do not understand the Galatian error. They preached salvation by conversion to “Judaism”. I do not. I preach salvation by trust in the blood of Messiah Yeshua and His resurrection ALONE. How about reading Galatians again and seeing that the ones preaching this were not even believers in Messiah? [2:4]

You all seem so bogged down in doctrine you can’t even think. Read the scriptures anew. Ask the Father if there are three gods in heaven. Dare to admit YOU might be wrong.

The impetus to turn from scripture to dogma was initiated in the Garden, and is the greatest sin of man. Yeshua brought the Jews back to scripture, those who would trust in Him. He did NOT throw out the Torah, nor the Covenants in it. Shaul told the Ephesians [et al] that gentile believers were BROUGHT INTO THE COVENANTS of Israel. [Eph 2:10-20] Shaul told the Jews [Hebrews 8] that the new covenant was in place, echoing Jeremiah 31:30-33, wherein the TORAH will be written on the hearts of trusting Israel. Just because some early gentiles rejected the Torah and believed in a trinity before Constantine codified it into roman law does not mean that it was right. [2 Peter 3:14-18] These are the overseers Constantine invited to the first council, because he needed ‘yes men’. He would not let ONE Jewish overseer come, and so, honest Gentile overseers chose not to go either! [Of 3000 overseeers, only about 250 showed up] He made the trinity and the sun-day sabbath ‘official’, yes, but G-d is the one who declared them wrong! Trinity is NOT in scripture in defining God. Triune is not in scripture. ONE is. Yeshua is Divine, but He is also HUMAN; He is what is common between God and man. He is the link between the Father and us, between Spirit and flesh; and He has to be BOTH to be that connection. Otherwise, His contention with sin did not exist. God cannot be tempted, but Yeshua was. If He was not tempted, then you and I are wasting our time confessing His victory over sin. Trinity is a Babylonian/Egyptian concept that wormed its way into gentile christian doctrine because they rejected Torah and TWISTED Shaul’s words [2 Peter 3:14-16].  They were ALREADY ‘watering down’ the Good News in his day, literally.

You are all adhering to it [trinity] out of residual fear of the inquisition, because you know you will be ostracized by those in power if you think for yourself and read what the text actually says. Those who come to the Messiah as a child are probably the most pure, because they hear and UNDERSTAND that God has a SON who was SENT as a MAN to die for their SINS [against the Torah]. Adding to that and making judgmental demands on other humans puts those people who do this in a very dangerous place: the judgment seat of the Messiah, who will judge the world according to the Torah.

The ONLY confession I look for out of a person to know he is my brother is that Yeshua is the Son, of God the Creator, and that Yeshua, the MAN, died, shedding His blood for my sins, and was raised from the dead by God His Father, and is now standing at His right hand and giving us His Father’s Ruakh until He is sent back BY HIS FATHER to receive us unto Himself. Anything beyond that is manmade. Any demand beyond that from religious authority is erroneous addition to His Word. I will not do it. “Hear, O Israel, יהוה is our God, יהוה is ONE.” ~ Yeshua, Mark 12:29

It REALLY IS that simple.

4 thoughts on “Don’t be an Inquisitor!”