I love me some good Matzah.

That’s my perspective as a human on the special bread we eat at Pesakh.

But, as one born of the Ru’akh of Elohim, I LOVE the Matzah that is Yeshua! 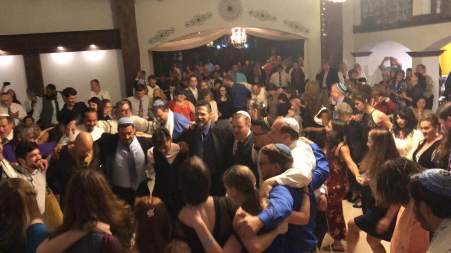 So many people refuse to observe the Pesakh, because some 1600-1700 years ago, when Gentiles became the majority of believers, and Rome divorced the believing gentile community from Judaism, and eventually murdered those Jews and Gentiles who would not submit, they have been told it is ‘unnecessary’ to keep the Pesakh.  And even WRONG to do so.

This is sad; because, while the true believers who remain victims of those errors DO get to participate in the true Body and Blood in spite of Rome, they never truly get to ‘taste’ the goodness of יהוה , the ‘sweetness’ of His commandments.  They read verses like Tehillah 19:8-11, and cannot ‘see’ the goodness of His Word, and that Yeshua embodies the commandments:

“The Torah of יהוה is perfect, restoring the soul; the testimony of יהוה is sure, making wise the simple.

The precepts of יהוה are right, rejoicing the heart; the Mitzvah of יהוה is pure, enlightening the eyes.

The fear of יהוה is clean, enduring forever; the ordinances of יהוה are true, they are righteous altogether;

More to be desired are they than gold, yes, than much fine gold; sweeter also than honey, and the honeycomb.”

This brief passage above is a clear description of Messiah Yeshua!  “Perfect, sure, right, pure, clean, true……” and Messiah does all those things these verses say Torah does, ‘restores the soul,’ makes wise the simple, etc.  Messiah Yeshua IS the Torah.

This passage is also a clear description of the GOODNESS of the Torah, the ‘instructions’ of the creator to mankind on how to live life.  Part of living life is enjoying His Pesakh!  Look how many chapters are devoted to it!  Exodus 4 through 15, and parts of many other books, and many verses in the Tehillim, and in all four gospels, with Yokhanan sharing Pesakh with us three times, and a huge part of Korinti’im Alef [1st Cor], and even the Hitaglut;  they all speak of Pesakh!

Our gentile Christian friends never truly get to ‘taste’ the fulness of Messiah and His Word as we are given in Pesakh.  They are AFRAID to, perhaps, because for thousands of years it has been hammered into their heads that keeping the Torah is death.  Nothing could be further from the truth.  “It is LIFE.”  Tehillah 19:8-11 is a brief version of 119.  It never ceases to amaze me how believers can read these passages and still dismiss the Torah, and not look into it and ‘see,’ and TASTE, that HE is GOOD!

Many people buy their Matzah for Pesakh.  We make ours.  Prayerfully.  And this year, the ‘taste’ of it just seemed ‘sweeter’ than ever.  But, more importantly, the ‘taste’ of Messiah at the Pesakh was sweeter than ever, since our Congregation is growing in the faith and in ‘brotherhood’, and becoming disciplined in studying His Word.

For me, personally, I ‘saw’ the Messiah the most in our children this year.  “Yeshua said to them, “Allow the little children to come to Me, and do not stop them, for Malkhut HaShamayim [the Kingdom of Heaven] is for such as these”.”  This is NOT to say that I did not see Messiah in our adults.  But, for me, I ‘saw’ Him very clearly in the JOY in our children.  In their willingness and DESIRE to ‘serve’ and participate.   First, they came and sang Ma Nishtana, “How different,”  a song containing the “Four Questions” of Pesakh.  They sang it so beautifully and enthusiastically, in Hebrew.  TOGETHER.  Then, when we read the four questions in English, I asked for ONE volunteer from among the little ones to read for us.  Almost all of them came to read!  IF ONLY there had been more than four questions!  I was moved to tears by their eager desire to participate.

When we read about the four sons, with the son who is unable to ‘ask’ about WHY we do Pesakh, my heart filled with compassion for children who cannot speak for themselves, and for children who are not even instructed about the Pesakh who may never get to ask, “Why do we do this?  Why is this night different from all other nights?”

The Pesakh employs all of our five senses, and children’s senses are more sharp.  They learn of Him so thoroughly in the Pesakh.  And when they came to search for the ‘Afikomen,’ the piece of Matzah that is taken out of the unity bag, wrapped in linen, and hidden, they did so together, joyfully.  They searched for Yeshua, the ‘Sweet Matzah,’ diligently.  And when I asked them about the search for Yeshua’s Body and the imagery of finding the Afikomen, one young boy rightfully declared, “He rose from the dead!”  They must have had a taste of the urgency of Miryam, “they have taken away Adoni, and I do not know where they have laid him.”  And a taste of her sheer joy when she found Him, “Rabuli!”  [my teacher!] The imagery was not wasted on me this year.  May they ever search for Him, while He may be found.

I remember realizing one year long ago as I read the scriptures, that the Passover must be replete with the imagery of Messiah Yeshua.  I remember wondering, “Why are we not doing this?”  Yeshua said this at His last Pesakh Seder:  “Do this, as often as you do it, to REMEMBER ME.”  He also said He would not drink wine again until He drinks it together with us!  Sha’ul added that, in keeping Pesakh and partaking of the Matzah, we “declare His death” until He comes.

Why must we declare His death?  We know it is His resurrection that proves He is Messiah.  But it is His death that is the moment we all heaped our sins on Him.  When He gave in to His death, that is when “He bore our sins.”  Sin killed Him.  NOT our Jewish people.  Yeshua surrendered to bearing the burden of our sins.  He had the power to rescue Himself.  He was, in a way, tempted to do so!  “Come down off of this tree and save yourself!” they mocked. But HE CHOSE to die.  This MUST be declared, as it was in Acts, 2, 3, 4, 9, 13, 14, and all throughout the world by those Jewish men who brought the B’sorah, the Good News of His Body, to the nations.

After having declared His Body and His Blood in the third cup, the ‘cup after supper’ that Yeshua took and blessed, we then got to see the imagery of the Resurrection, when our children found the Afikomen.  And then we got to anticipate the coming of Eliyahu to announce the return of our King.  Last year, when our boys opened the door, one of our members had been indisposed, and was standing in the doorway when it opened.  As he had not yet been given a Hebrew name, we now call him Eliyahu.  This year, thinking never to have such a moment again, especially since this year our door actually went outside of the venue, versus into a lobby as it did last year; surely no one would be standing there.  But, when the boys opened the door, last year’s Eliyahu was standing just to the right of it, and when the door opened, MY DAUGHTER was standing there!  She was trying to be discrete in her journey, and instead stood in the place of Eliyahu at just the perfect moment.  Eliyahu, when he comes, will turn the hearts of the children to their fathers, and the hearts of the fathers to their children.  I have always loved my children dearly.  But, even though they are now grown, and I am a grandfather, my heart yearns for my children, more than ever.  Seeing my own daughter standing there, sheepishly, brought me more joy.

After closing out the seder, we then danced and sang more heartily than I can ever remember.  The rejoicing on the faces of both our members and guests betrayed the awe that was in all our hearts.  And then, our men gathered at the Synagogue for a night of watching, and we read and sang first the Hallel [Ps 113-118, 136], as Yeshua did, [Matti 26:30, Mar 14:26], then the songs of Ascent, and then each man present read his ‘favorite’ chapter[s] of Tehillim.  We then fellowshipped, and sang other songs until morning broke into a beautiful day.

This Pesakh will always be remembered.  The Seder is ALWAYS special, but this one was highly desired and anticipated, even ‘fought for,’ and it did not disappoint.  Getting up to it, my dear brother pointed out, was like the ‘birthpangs’, but the joy of ‘breaking through’ and seeing the Light of Messiah afresh, and tasting of HIM, touching Him, makes the memory of it nothing but sweet.  We often hear of SALVATION as a result of our Seders, and healings, and reconciliations.  I cannot wait until we hear of the power displayed by Messiah as the result of this latest Pesakh Seder, where the Matzah was broken.  I invite all to plan and prepare to come to our Seder next year!